Written by Laura and Helen

When we last left our hero, he was standing the elevator after a late-night of partying, facing off against a beetle-browed[1] Acquisitions Editor[2]: now is the time for him to sum up in thirty words or less[3] the grand sweep of his narrative arc[4]—the superb world-building, the subtle yet definitive characterizations, the political machinations of a precarious royal court, the passionate yet secret love affair of its prince, his stalwart allies, his implacable foes, his love of horsemanship, husbandry, and heraldry; that one time at summer camp when he experimented with…[5]

I think that’s probably enough. Here’s the bit where we tell you how to get to the point. 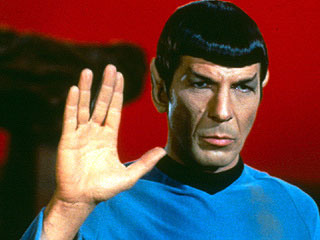 1)      The pitch conveys the dramatic story in the most abbreviated manner possible.

2)      It presents the major throughline of the dramatic narrative without character intricacies and sub-plots.

One of the key components of an elevator pitch is a simple yet sufficiently dramatic description of what your book is about. This isn’t the same as a synopsis, exactly. Your description needs to be streamlined, pared down, and simplified. Every word needs to pull its weight in conveying audience, genre, setting, character and plot.

Let’s start by taking a look at Neil Gaiman’s super-mega success, American Gods. For a synopsis, we’ve taken the plot summary from Wikipedia…

Draft 1: The First Cut is the Deepest 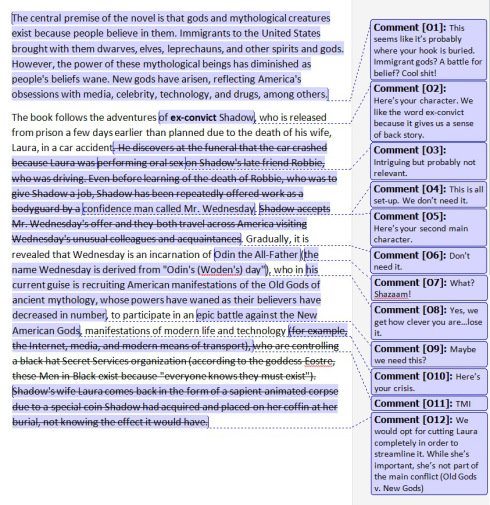 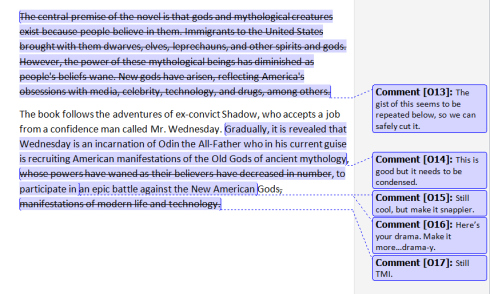 This hard-boiled urban fantasy follows ex-convict Shadow and his boss, the confidence man and possible Norse deity, Mr. Wednesday, along with a cast of burned-out mythological deities on a cross-country attempt at a comeback tour.

We’re not done yet. Join us next week for more on elevator pitches and the elusive art of the logline…

[1]Clearly Helen wrote that. No one says “beetle-browed” outside of nineteenth-century poetry.

[4] We’re most of the way through our opening pitch and you’ve got nothing.

[5] No one reads the footnotes anyway, smart ass.

13 Comments to How to Write an Elevator Pitch, Part 1