So when last we left our intrepid readers….it was May 15, 2012. Now, from up here it may look like we dropped the ball. Indeed, it seems cruel to post a “Part 1″ and end with “We’re not done yet. Join us next week for more on elevator pitches and the elusive art of the logline…” I think it probably is cruel. Definitely. Cruelty: check plus.

Here is our explanation. Or, rather, my explanation, me being Helen, because I am writing this post.

Shortly after posting “How to Write an Elevator Pitch, Part 1” I went to England for two weeks on a research trip in which I saw many medieval manuscripts, drank much beer, and learned far more about torture, plague, dismemberment, burning alive, ghosts, bogeys, writing, monks, chocolate, the Jubilee, fish and chips, and Scotch then you could possibly imagine.[1] It was a good trip. Two days after returning, I flew out, jetlagged as all get out, for Seattle where I started the Clarion West Writers Workshop. This was a spectacular experience about which I will say much more in dribs and drabs over the coming months, but for those of you who don’t know, Clarion West is “an intensive six-week workshop for writers preparing for professional careers in science fiction and fantasy” which featured the instructors Mary Rosenblum, Stephen Graham Jones, George R. R. Martin, Connie Willis, Gavin Grant, Kelly Link and Chuck Palahniuk. Way cool, you might say. And it was.[2] But the thing is that during that time, they asked that we place a moratorium on blogging, tweeting and posting about the workshop. Fair enough. There was a heck of a lot of writing, critiquing, Thinging, drinking, etc. going on…not to mention a two-meter floating shark named Sandina who stalked the halls at night.[3] Enough about me. 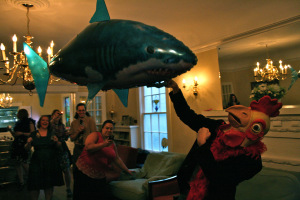 In that time, also, Laura managed to get herself a job.[4] A real job. A job that pays her lots of money and keeps her out of trouble, and also out of the dumps she had taken to rummaging for food, books and interesting headgear. You might say that Laura’s employment is not nearly as interesting as my sabbatical–and you might be right–but we’ll say no more about that.

Except, of course, that we are back.

And we have learned many interesting lessons. The first of these lessons is that blogging is apparently not something that happens spontaneously while you are doing other things. So, sorry about that, we will try to be more diligent.

Some of these interesting lessons are going to get posted over the next few weeks. In particular, there’s a huge amount that I learned at Clarion West. I’m still digesting and processing it, but I think one of the best way to do this will be to post about it on the blog. Not on the actual goings-on, of course–those must remain shrouded in mystery–but on the weird tricks I managed to pick up along the way.

So now you know–we’re back, we’re ready, and we’re going to knock your socks off, by gumbo![6] Stay tuned.

[1] Yes, Helen, we all feel such sympathy for you right now. Bitch.

[2] This is all to say that Helen has been weeping uncontrollably since she stepped off the plane. If I didn’t let her talk about it on here, I’d have to hear about it at home for the Next. Twelve. Months.

[3] I confess, this bit did sound pretty cool. I like sharks.